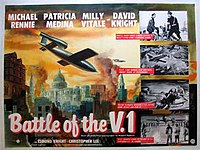 Battle of the V-1 (also known as Battle of the V.1, Battle of the V1, Missiles from Hell and Unseen Heroes) is a British war film from 1958, starring Michael Rennie, Patricia Medina, Milly Vitale, David Knight and Christopher Lee. It is based on the novel They Saved London (1955), by Bernard Newman.

The film tells the story of a Polish Resistance group which discovers details of the manufacture of the German V-1 'Flying Bomb' at Peenemünde in 1943. Liaising with service chiefs in London, the group manage to pass on enough information to convince them to launch a bombing raid and, in the climax to the film, are able to steal a V-1 which lands in a field during testing and arrange for its transport back to Great Britain.