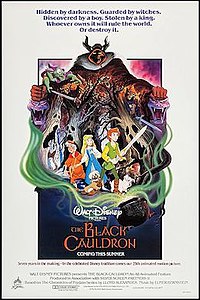 The Black Cauldron is a 1985 American animated fantasy film produced by Walt Disney Feature Animation in association with Silver Screen Partners II and released by Walt Disney Pictures. The 25th Disney animated feature film, it is loosely based on the first two books in The Chronicles of Prydain by Lloyd Alexander, a series of five novels that are, in turn, based on Welsh mythology.

In the land of Prydain, Taran, a teenage boy and "assistant pig-keeper" on the small farm of Caer Dallben, home of Dallben the Enchanter, dreams of becoming a famous warrior. Dallben learns the evil Horned King is searching for a mystical relic known as the Black Cauldron, which can create an invincible army of undead warriors: the "Cauldron-Born". Dallben fears the Horned King might use his pig Hen Wen, who has oracular powers, to locate the cauldron. Dallben directs Taran to take Hen Wen to safety; unfortunately, Taran's foolish daydreaming causes Hen Wen to be captured by Gwythaints, the Horned King's dragon-like creatures.