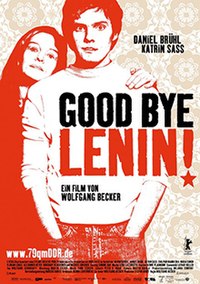 Good Bye Lenin! is a 2003 German tragicomedy film, directed by Wolfgang Becker. The cast includes Daniel Brühl, Katrin Saß, Chulpan Khamatova, and Maria Simon. The story follows a family in East Germany; the mother (Saß) is dedicated to the socialist cause and falls into a coma in October 1989, shortly before the November revolution. When she awakens eight months later in June 1990, her son (Brühl) attempts to protect her from a fatal shock by concealing the fall of the Berlin Wall and the collapse of communism.

The film is set in East Berlin, from October 1989 to just a year after German reunification.