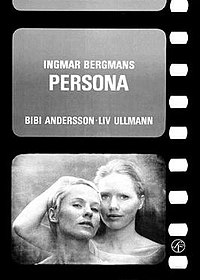 Persona is a 1966 Swedish psychological drama film, written and directed by Ingmar Bergman and starring Bibi Andersson and Liv Ullmann. The story revolves around a young nurse named Alma (Andersson) and her patient, well-known stage actress Elisabet Vogler (Ullmann), who has suddenly stopped speaking. They move to a cottage, where Alma cares for Elisabet, confides in her and begins having trouble distinguishing herself from her patient.

A projector begins screening a series of images, including a crucifixion, a spider and the killing of a lamb, and a boy wakes up in a hospital or morgue. He sees a large screen with a blurry image of two women. One of the women may be Alma, a young nurse assigned by a doctor to care for Elisabet Vogler. Elisabet is a stage actress who has suddenly stopped speaking and moving, which the doctors have determined is the result of willpower rather than physical or mental illness. In the hospital, Elisabet is distressed by television images of a man's self-immolation during the Vietnam War. Alma reads her a letter from her husband that contains a photo of their son, and the actress tears the photograph up. The doctor speculates that Elisabet may recover better in a cottage by the sea, and sends her there with Alma.