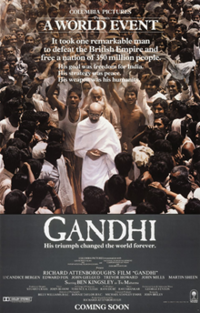 Gandhi is a 1982 period biographical film based on the life of Mahatma Gandhi, the leader of nonviolent non-cooperative Indian independence movement against the British Empire during the 20th century. A co-production between India and United Kingdom, it is directed and produced by Richard Attenborough from a screenplay written by John Briley. It stars Ben Kingsley in the title role. The film covers Gandhi's life from a defining moment in 1893, as he is thrown off from a South African train for being in a whites-only compartment and concludes with his assassination and funeral in 1948. Although a practising Hindu, Gandhi's embracing of other faiths, particularly Christianity and Islam, is also depicted.

On 30 January 1948, on his way to an evening prayer service, an elderly Gandhi is helped out for his evening walk to meet a large number of greeters and admirers. One visitor, Nathuram Godse, shoots him point blank in the chest. His state funeral is shown, the procession attended by millions of people from all walks of life, with a radio reporter speaking eloquently about Gandhi's world-changing life and works.