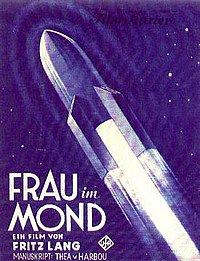 Woman in the Moon (German Frau im Mond) is a science fiction silent film that premiered 15 October 1929 at the UFA-Palast am Zoo cinema in Berlin to an audience of 2,000. It is often considered to be one of the first "serious" science fiction films. It was written and directed by Fritz Lang, based on the 1928 novel The Rocket to the Moon by his collaborator Thea von Harbou, his wife at the time. It was released in the US as By Rocket to the Moon and in the UK as Woman in the Moon. The basics of rocket travel were presented to a mass audience for the first time by this film, including the use of a multi-stage rocket. The film was shot between October 1928 and June 1929 at the UFA studios in Neubabelsberg near Berlin.

Helius (Willy Fritsch) is an entrepreneur with an interest in space travel. He seeks out his friend Professor Mannfeldt (Klaus Pohl), a visionary who wrote a treatise claiming that there was probably much gold on the Moon, only to be ridiculed by his peers. Helius recognizes the value of Mannfeldt's work. However, a gang of evil businessmen have also taken an interest in Mannfeldt's theories, and send a spy (Fritz Rasp) who identifies himself as "Walter Turner".