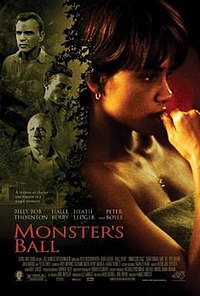 Monster's Ball is a 2001 American romantic drama film directed by Marc Forster, produced by Lee Daniels and written by Milo Addica and Will Rokos, who also appear in the film. It stars Halle Berry, Billy Bob Thornton, Heath Ledger, and Peter Boyle, with Sean Combs, Mos Def, and Coronji Calhoun in supporting roles. Thornton portrays a widowed corrections officer who begins a relationship with a woman (Berry), unaware that she is the widow of a man (Combs) he executed.

Hank Grotowski, a widower, and his son, Sonny, are white correctional officers in a prison in Georgia. They reside with Hank's father, Buck, a bigoted retired correctional officer whose wife (Hank's mother) died by suicide. Sonny is friends with the Cooper brothers, Willie and Darryl, who are black. At the behest of Buck, Hank frightens off the brothers with a shotgun and is later confronted by their father Ryrus.