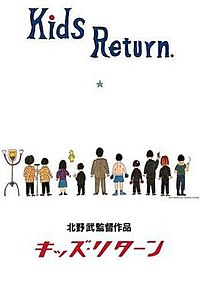 is a 1996 Japanese film written, edited and directed by Takeshi Kitano. The film was made directly after Kitano recovered from a motorcycle wreck that left one side of his body paralyzed. After undergoing extensive surgery and physical therapy, he quickly went about making Kids Return amidst speculation that he might never be able to work again. The movie is about two high school dropouts, Masaru (Ken Kaneko) and Shinji (Masanobu Andō), who try to find a direction and meaning in their livesone by becoming a yakuza lieutenant, the other by becoming a boxer.

Shinji and Masaru are high school delinquents, terrifying their classmates, stealing money, and even setting their teacher's car on fire. After some of their victims hire a boxer to beat up Masaru, he decides to get revenge, and takes his shy friend Shinji along with him to a boxing gym. To their trainers' surprise, Shinji is naturally-talented at boxing and easily defeats Masaru in a sparring session. Masaru encourages his friend to keep going at it, and quits boxing, opting instead to join the yakuza. As Shinji focuses on becoming a successful boxer, Masaru aims to become a gang leader, and their paths diverge.