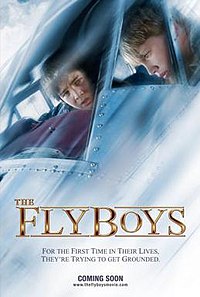 The Flyboys (released Internationally as Sky Kids) is a 2008 American aviation adventure film starring Reiley McClendon, Jesse James, Stephen Baldwin and Tom Sizemore. The Flyboys revolve around a "coming-of-age" story of two boys from a small town who find their courage tested when they accidentally stow away aboard an aircraft owned by the mob. This was the final film for actor Harrison Young, who died three years before the film was released.

Two kids from a small town, the new kid, Kyle Barrett (Reiley McClendon), finds himself saving one of his peers at school, Jason McIntyre (Jesse James), from a group of bullies and they quickly become friends. Although they come from different sides of the track, the two set out on an adventure. While playing hookey from school, the pair decide to go to the local airport, where Jason's uncle works, for some excitement. When they find aircraft are left unlocked, they sneak inside for a better look, trying out the controls first on a small light aircraft and then they check out a larger, twin-engined airliner.