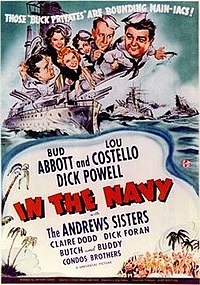 In the Navy is a 1941 film starring the comedy team of Abbott and Costello. It was the second service comedy based on the peacetime draft of 1940. The comedy team appeared in two other service comedies in 1941, before the United States entered the war: Buck Privates released in January and Keep 'Em Flying released in November.

Popular crooner Russ Raymond (Dick Powell) abandons his career at its peak and joins the Navy using his real name, Tommy Halstead. However, Dorothy Roberts (Claire Dodd), a reporter, discovers his identity and follows him in the hopes of photographing him and revealing his identity to the world.