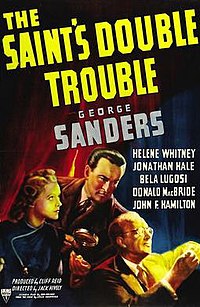 The Saint's Double Trouble is a 1940 action-adventure film produced by RKO Pictures. The film stars George Sanders as Simon Templar, a.k.a. "The Saint", a master criminal turned crime-fighter, and features horror film legend Bela Lugosi as "The Partner". This was the fourth of eight films in RKO's film series about the character created by Leslie Charteris, and the first film to not be directly based upon one of the original Saint books, although Charteris did contribute to developing the story for the film.

An authentic mummy is packaged and shipped from Cairo to Professor Horatio Bitts in Philadelphia. The package is sent under the name Simon Templar, but the sender is a man called The Partner, who is a member of an international team of jewel thieves, led by Boss Duke Bates.