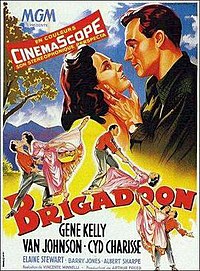 Brigadoon is a 1954 American Metro-Goldwyn-Mayer musical film made in CinemaScope and Metrocolor based on the 1947 Broadway musical of the same name by Alan Jay Lerner and Frederick Loewe. The film was directed by Vincente Minnelli and stars Gene Kelly, Van Johnson, and Cyd Charisse. Brigadoon has been broadcast on American television and is available in VHS, DVD and Blu Ray formats.

Americans Tommy Albright (Gene Kelly) and Jeff Douglas (Van Johnson) are on a hunting trip in Scotland and become lost in the woodlands. They happen upon Brigadoon, a miraculously blessed village that rises out of the mists every hundred years for only a day. (This was done so that the village would never be changed or destroyed by the outside world.) Tommy falls in love with village lass Fiona Campbell (Cyd Charisse), whose younger sister Jean (Virginia Bosler), is about to be married to Charlie Dalrymple (Jimmy Thompson). When Tommy and Jeff happen upon clues about the village and its people that make no sense, Fiona takes them to see Mr. Lundie (Barry Jones), the village schoolmaster, who tells them the story of Brigadoon and the miracle. If any villager ever leaves Brigadoon, the spell will be broken and the village will vanish forever. Furthermore, Lundie tells them, any outsider who wishes to stay must love someone in the village strongly enough to accept the loss of everything he or she knew in the outside world. That evening, Mr. Lundie officiates at the wedding of Jean and Charlie, which Tommy and Fiona attend. Interrupting the wedding, the jealous Harry Beaton (Hugh Laing) announces he is leaving Brigadoon to make everything disappear, since the girl he loves, Jean, is marrying another man. Harry's words cause mass chaos among the townspeople and they all rush to stop him. Harry almost crosses the bridge but is stopped short by Tommy. They scuffle and Tommy is knocked unconscious. With men closing in on him, Harry climbs up a tree to hide but is accidentally gunned down by Jeff, who skipped the wedding to go hunting. Harry falls dead to the ground and is soon found by the men. Fiona frantically searches for and finds Tommy. Confessing their love for each other, they decide to marry, allowing Tommy to stay in Brigadoon for good. But while Fiona goes off to find Mr. Lundie, Tommy tells Jeff about his plan. Jeff, drunk and remorseful of accidentally killing Harry, tells Tommy he can't just leave everything in the real world behind for this girl he's only known a day. Fiona returns with Mr. Lundie, but Tommy confesses that he cannot stay. Fiona says she understands but is heartbroken and they say good-bye before Brigadoon completely disappears. Tommy and Jeff cross the bridge and walk away.