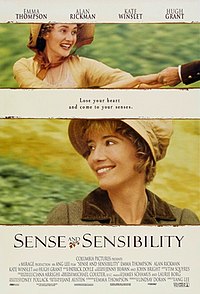 Sense and Sensibility is a 1995 British-American period drama film directed by Ang Lee and based on Jane Austen's 1811 novel of the same name. Emma Thompson wrote the screenplay and stars as Elinor Dashwood, while Kate Winslet plays Elinor's younger sister Marianne. The story follows the Dashwood sisters, members of a wealthy English family of landed gentry, as they must deal with circumstances of sudden destitution. They are forced to seek financial security through marriage. Hugh Grant and Alan Rickman play their respective suitors. The film was released on December 13, 1995, in the United States.

On his deathbed, Mr. Dashwood tells his son from his first marriage, John, to take care of his second wife and three daughters, Elinor, Marianne, and Margaret, since under English law they will inherit nothing. John promises to do so. John's stingy, greedy and snobbish wife Fanny convinces him to give his half sisters nothing financially; John and Fanny immediately install themselves in the large house, forcing the Dashwood ladies to look for a new home.