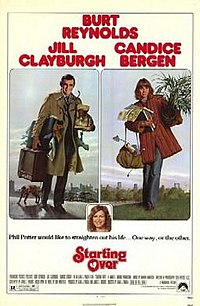 Starting Over is a 1979 American comedy film based on Dan Wakefield's 1973 novel, produced by James L. Brooks, and directed by Alan J. Pakula. Starring Burt Reynolds, Jill Clayburgh, and Candice Bergen, it follows a recently divorced man who is torn between his new girlfriend and his ex-wife.

Phil Potter (Burt Reynolds) splits with his wife, Jessica (Candice Bergen). She wants to be a singer/songwriter and has been having an affair.