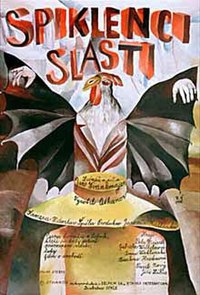 Conspirators of Pleasure is a 1996 black comedy film by Jan Švankmajer. His third feature film after Alice and Faust, it was nominated for the Golden Leopard at the Locarno International Film Festival.

In Prague, Mr. Pivoňka, an unmarried man, buys some pornography from his local newsagent, Mr. Kula, and returns home. A postwoman, Mrs. Malková gives him a letter which reads "On Sunday" in cut-out letters. In secret, she then rolls pieces of bread into little balls and carries them in her satchel. Pivoňka asks his neighbour, Mrs. Loubalová, to slaughter a chicken for him. Using the leftover feathers and papier-mâché made from the pornography, he constructs a chicken head and fabricates wings made from umbrellas. Meanwhile, police captain Weltinský buys rolling pins and pan lids from the same shop that sells Pivoňka's umbrellas. Using these items, plus stolen pieces of fur and sharp things, Weltinský constructs unusual objects in his workshop. His wife, a newsreader named Anna Weltinská (who portrays herself), feels neglected and buys some live carp. She is unaware that Kula is in love with her image and has constructed a machine rigged to stroke and masturbate him when she is on television. Pivoňka and Loubalová construct life-size effigies of each other.