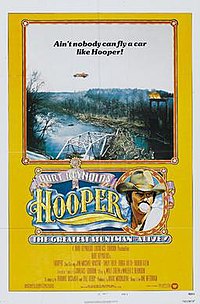 Hooper is a 1978 American action comedy film directed by Hal Needham and starring Burt Reynolds, Sally Field, Jan-Michael Vincent, Brian Keith, Robert Klein, James Best and Adam West. The film serves as a tribute to stuntmen and stuntwomen in what was at one time an underrecognized profession. At the time of filming, Field and Reynolds were in a relationship, having met on the set of Smokey and the Bandit the previous year.

Sonny Hooper (Burt Reynolds) is the stunt coordinator on the action film The Spy Who Laughed at Danger, directed by Roger Deal (Robert Klein) and starring Adam West (playing himself). Sonny's antics and wisecracks are a trial for the egotistical director and his officious but cowardly assistant, Tony (Alfie Wise). Years of numerous "gags" and his use of alcohol and painkillers are beginning to take their toll. Sonny lives with his girlfriend Gwen Doyle (Sally Field), whose father Jocko (Brian Keith) is a retired stuntman.