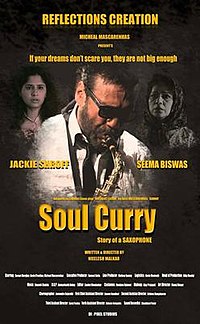 Soul Curry is a 2017 Indian film in Konkani, written and directed by Nieelesh Malkar. It features Jackie Shroff, Seema Biswas and Sonam Morajkar in the lead roles. The film won many awards in the state of Goa, and Shroff even won an award individually. It premiered in theatres on 20 January, 2017.

Philip (Jackie Shroff) is an arrogant saxophone player. Due to the increasing use of technology in music and his poor attitude, Philip finds it difficult to get work. Philip is married to Mary (Seema Biswas), who was also an aspiring singer but gave up her career for love. Together, they have four daughters. However, Philip is plagued by the lack of a son, and one day, kicks out his whole family.