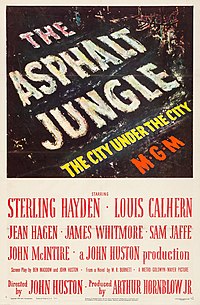 The Asphalt Jungle is a 1950 film noir and heist film directed by John Huston. Based on the 1949 novel of the same name by W. R. Burnett, it tells the story of a jewel robbery in a Midwestern city. The film stars Sterling Hayden, Louis Calhern and Jean Hagen, and features James Whitmore, Sam Jaffe, and John McIntire. Marilyn Monroe also appears, in one of her earliest roles.

When criminal mastermind Erwin "Doc" Riedenschneider (Sam Jaffe) is released from prison after seven years, he goes to see a bookie named Cobby (Marc Lawrence) in an unnamed Midwest river city (probably Cincinnati), who arranges a meeting with Alonzo Emmerich (Louis Calhern), a lawyer. Emmerich listens to Doc's plan to steal jewelry worth half a million dollars or more. Doc needs $50,000 to hire three men—a "box man" (safecracker), a driver, and a "hooligan"—to help him pull off the caper. Emmerich agrees to provide the money and assume the responsibility for disposing of the loot.