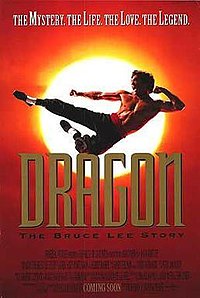 Dragon: The Bruce Lee Story is a 1993 American biographical drama film directed by Rob Cohen. The film stars Jason Scott Lee, with a supporting cast including Lauren Holly, Nancy Kwan and Robert Wagner. The film follows the life of actor and martial artist Bruce Lee (Jason) from his relocation to the United States from Hong Kong to his career as a martial arts teacher, and then as a television and film actor. It also focuses on the relationship between Bruce and his wife Linda Lee Cadwell, and the racism to which Bruce was subjected.

In Hong Kong, Bruce Lee's father Lee Hoi-chuen awakens from a nightmare about a phantom, known as the Demon, haunting his young son. He subsequently enrolls him in Chinese martial arts training with instructor Yip Man. As a young adult, Bruce fights British sailors who are harassing a young Chinese woman, resulting in him having to leave Hong Kong. His father insists he go to the US.