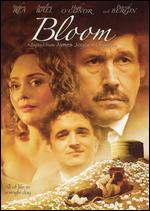 Bloom is a 2003 Irish film written and directed by Sean Walsh, based on the 1922 novel Ulysses by James Joyce. The film premiered at the 2003 Taormina Film Festival. Angeline Ball won the award for "Best Actress in a Film" at the Irish Film and Television Awards. The soundtrack was written and produced by David Kahne.

Bloom takes place on 16 June 1904 and attempts to make a visual reconstruction of Joyce's stream of consciousness style.