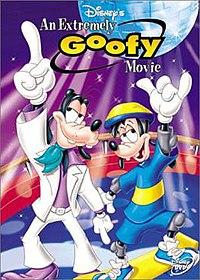 An Extremely Goofy Movie is a 2000 animated comedy film distributed by Walt Disney Home Video, produced by Walt Disney Television Animation, and directed by Douglas McCarthy. It is a standalone sequel to the 1995 film A Goofy Movie and the finale to the television series Goof Troop, in which Max Goof goes to college and believes he will not have to deal with his father, Goofy, until he loses his job and enrolls there to receive the degree he never received years ago in order to get another one. Meanwhile, Max and his friends compete in the X Games, unaware of the reason why the school's top fraternity has a dynasty in the competition.

After Max Goof goes to college with his friends P.J. and Bobby Zimuruski, his father, Goofy, begins to disastrously falter during his job at the local toy factory, resulting in his dismissal following an accident he causes. At the unemployment office, Goofy is told that he needs a college degree to get another job since he dropped out after his junior year in the 1970s. Meanwhile, Max and his friends meet Bradley Uppercrust III, the leader of the Gamma Mu Mu fraternity and a veteran skateboarder. Bradley is impressed by Max's own skateboarding talent and invites him to join the Gammas and take part in the college's X Games. Max declines the offer due to the condition that he cannot bring his friends along. Following a skirmish, the two parties place a bet in which the loser becomes the other group's towel boy. To Max's horror, Goofy begins attending the same college and interrupts the group's down-time with chores. Max decides to distract his father by introducing him to the college librarian, Sylvia Marpole, with whom he has much in common. Goofy accidentally impresses Bradley with his clumsy attempt at skateboarding and is invited to join the Gammas, which he accepts upon Max's encouragement.