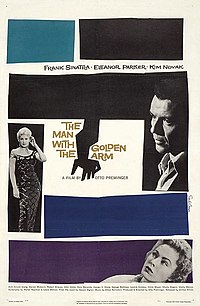 The Man with the Golden Arm is a 1955 American drama film with elements of film noir, based on the novel of the same name by Nelson Algren. It recounts the story of a drug addict who gets clean while in prison, but struggles to stay that way in the outside world. Although the addictive drug is never identified in the film, according to the American Film Institute "most contemporary and modern sources assume that it is heroin", in contrast to Algren's book which named the drug as morphine. The film stars Frank Sinatra, Eleanor Parker, Kim Novak, Arnold Stang and Darren McGavin. It was adapted for the screen by Walter Newman, Lewis Meltzer and Ben Hecht (uncredited), and directed by Otto Preminger. The film's initial release was controversial for its treatment of the then-taboo subject of drug addiction.

Frankie Machine (Frank Sinatra) is released from the federal Narcotic Farm in Lexington, Kentucky with a set of drums and a new outlook on life, and returns to his run-down neighborhood on the North Side of Chicago. A drug addict (the drug is never named, but heroin is strongly implied), Frankie became clean in prison. On the outside, he greets friends and acquaintances. Sparrow (Arnold Stang), who runs a con selling homeless dogs, clings to him like a young brother, but Schwiefka (Robert Strauss), whom Frankie used to deal for in his illegal card game, has more sinister reasons for welcoming him back, as does Louie (Darren McGavin), Machine's former drug dealer.