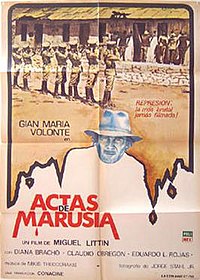 Letters from Marusia is a 1975 Mexican film directed by Chilean filmmaker Miguel Littín. It was nominated for the Academy Award for Best Foreign Language Film. It was also entered into the 1976 Cannes Film Festival. The film is based on a Patricio Manns novel (1974) inspired by the Marusia massacre of 1925.