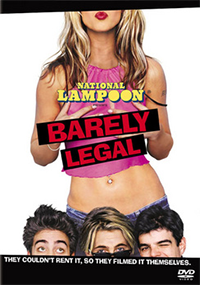 National Lampoon's Barely Legal is a 2003 American comedy film about three male high school students who decide to make money by selling pornographic videos, in the hopes of gaining both women and standing among their peers. The film was also known as After School Special.

Matt, Fred, and Deacon are three high school teenagers who are obsessed with sex, but unable to obtain it. Frustrated at being restricted to fantasy and voyeurism, they decide to film a pornographic movie, in order to gain access to women, money and social standing. Fred steals credit card records from one of his father's patients, and posing as adults, they purchase a web hosting service for After School Speciala site "by virgins, for virgins". Masquerading as Hawaiians vacationing in Cleveland, they cast local strippers.