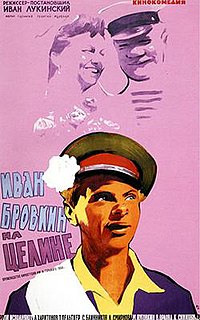 Ivan Brovkin on the State Farm 1959

Ivan Brovkin on the State Farm is a 1959 Soviet comedy film directed by Ivan Lukinsky, sequel to the film Private Ivan. The film was a box-office success, it was seen by 44,6 million viewers in the USSR.

Ivan Brovkin completes military service with the rank of sergeant, and with a group of friends decides to go after demobilization to the developed virgin lands. He arrives to his native kolkhoz and is greeted by a cool reception: the collective farm chairman, bride Lyubasha and her mother regard him as traitor. The planned wedding is canceled and Brovkin leaves for the virgin land.