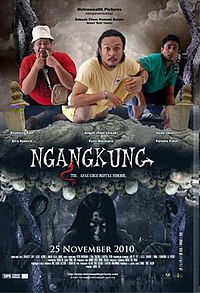 Ngangkung is a horror comedy film directed by Ismail Bob Hashim. The film was released theatrically in Malaysia on 25 November 2010. The film stars Shaheizy Sam, Angah King Lawak, and Azad Jasmin, and the story centers on three friends who are stuck gambling on lottery. It is one of the highest grossing films of Malay cinema.

Ngangkung is the act of summoning spirits by a bomoh so as to obtain winning lottery numbers. This may be done by bringing things for the worship to the bomoh, and these items may be hard to find such as old kris, old coins and so on. The film tells of Azim, a driver who lives in a suburban village with his wife Suri and his daughter. Azim has two good friends, Tasnim and Wan. Tasnim and Wan are heavily involved in gambling on the lottery and their activities are known to their wives.