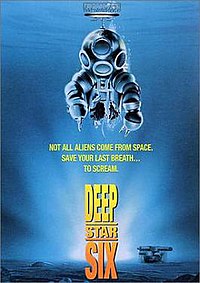 DeepStar Six is a 1989 American science fiction horror film about the struggles of the crew of an underwater military outpost to defend their base against the attacks of a sea monster (possibly a giant eurypterid). It was released in January 1989. The film's main actors and supporting players included Greg Evigan, Taurean Blacque, Nancy Everhard, Cindy Pickett, Miguel Ferrer, Nia Peeples and Matt McCoy.

DeepStar Six is an experimental deep sea US Naval facility, crewed by a mix of 11 military and civilians, now in the final week of their tour. The project is headed by John Van Gelder (Marius Weyers), in order to test underwater colonization methods, while overseeing the installation of a new nuclear missile storage platform. Already nearing his deadline, Van Gelder's plans are threatened when geologist Burciaga (Elya Baskin) discovers a massive cavern system under the site. Van Gelder orders the use of depth charges to collapse the cavern, to the dismay of Dr. Scarpelli (Nia Peeples), who wants to study the potentially primordial ecosystem inside.