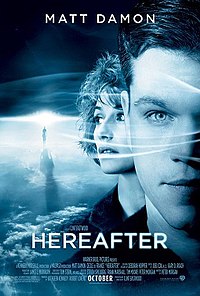 Hereafter is a 2010 American fantasy disaster drama film directed, co-produced, and scored by Clint Eastwood, written by Peter Morgan, and executive produced by Steven Spielberg. The film tells three parallel stories about three people affected by death in similar waysall three have issues of communicating with the dead; Matt Damon plays American factory worker George, who is able to communicate with the dead and who has worked professionally as a clairvoyant, but no longer wants to communicate with the dead; Cécile de France plays French television journalist Marie, who survives a near-death experience during the 2004 Indian Ocean tsunami; and British schoolboy Marcus (played by Frankie and George McLaren), who loses the person closest to him. Bryce Dallas Howard, Lyndsey Marshal, Jay Mohr, and Thierry Neuvic have supporting roles.

On assignment in India, French television journalist Marie Lelay is caught in the 2004 Indian Ocean tsunami. Pulled lifeless from the water, she is resuscitated but left for dead. She gasps back to life after a near death experience, glimpsing a vision of the afterlife. Marie is reunited with her lover Didier as the disaster subsides, and they return to Paris. Marie's experience interferes with her work, and Didier, also her producer, sends her on a leave of absence.