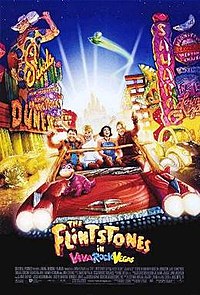 The Flintstones in Viva Rock Vegas 2000

Young bachelors and best friends Fred Flintstone and Barney Rubble have recently qualified as crane operators at Slate & Company. Soon to be employed, now they want dates, and a little green alien The Great Gazoo, exiled to Earth by his species, offers to help, although only they can see him. Meanwhile, Wilma Slaghoople wants a normal life and activities, like bowling, despite her controlling mother Pearl, who wants her to marry smooth casino-owner Chip Rockefeller. Wilma angrily runs away to Bronto King in Bedrock. Waitress Betty O'Shale mistakes her as "caveless", and offers to share her apartment, and gets her a job.