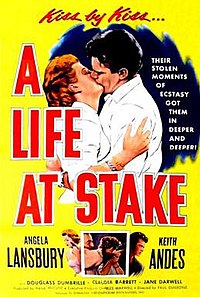 A Life at Stake is a 1954 American film noir directed by Paul Guilfoyle. It stars Angela Lansbury and Keith Andes.

Down-on-his-luck Los Angeles architect and builder Edward Shaw (Keith Andes) is approached by Doris Hillman (Angela Lansbury) with a business proposal: buying land together, on which he would build houses that she would then sell, using her experience as a former real estate broker. Her husband, Gus Hillman, a wealthy businessman, would be willing to contribute half a million dollars as capital for the venture.