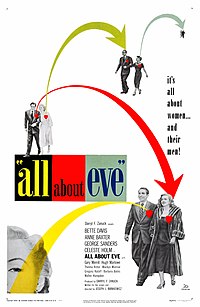 All About Eve is a 1950 American drama film written and directed by Joseph L. Mankiewicz, and produced by Darryl F. Zanuck. It was based on the 1946 short story "The Wisdom of Eve" by Mary Orr, although screen credit was not given for it.

Margo Channing (Bette Davis) is one of the biggest stars on Broadway. But having just turned forty, she is worried about what her advancing age will mean for her career. After a performance of Margo's latest play, Aged in Wood, Margo's close friend Karen Richards (Celeste Holm), wife of the play's author Lloyd Richards (Hugh Marlowe), brings in a besotted fan, Eve Harrington (Anne Baxter), to meet Margo. Eve tells the group gathered in Margo's dressing room—Karen, Lloyd, Margo's boyfriend, Bill Sampson (Gary Merrill), a director who is eight years her junior, and Margo's maid Birdie (Thelma Ritter)—that she followed Margo's last theatrical tour to New York City after seeing her perform in San Francisco. She tells an engrossing story of growing up poor in Wisconsin and losing her young husband Eddie in the South Pacific during World War II. Moved, Margo quickly befriends Eve, takes her into her home, and hires her as her assistant, leaving Birdie, who instinctively dislikes Eve, feeling put out.