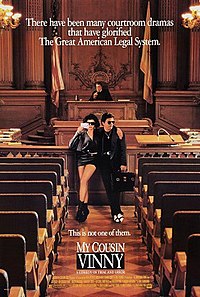 My Cousin Vinny is a 1992 American comedy film directed by Jonathan Lynn, from a screenplay by Dale Launer. The film stars Joe Pesci, Ralph Macchio, Marisa Tomei, Mitchell Whitfield, Lane Smith, Bruce McGill, and Fred Gwynne in his final film appearance. It was distributed by 20th Century Fox and released on March 13, 1992.

Driving through Alabama in their metallic, mint-green 1964 Buick Skylark convertible, Bill Gambini and Stan Rothenstein, college students from New York who just got scholarships to UCLA, shop at a Sac-O-Suds convenience store and accidentally shoplift a tin of tuna. After they leave, the store clerk is robbed and killed, and Bill and Stan are arrested for the murder. Due to circumstantial evidence and a confession to the shoplifting that is misconstrued as one to the shooting, Bill is charged with first-degree murder, and Stan as an accessory. Bill's mother reminds him there is an attorney in the family: his cousin Vinny. Vincent LaGuardia "Vinny" Gambini travels there, accompanied by his fiancée, Mona Lisa Vito. Although willing to take the case, Vinny is a personal injury lawyer from Brooklyn, newly admitted to the bar and with no trial experience.