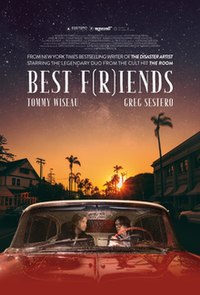 Best F(r)iends is a 2017 American dark comedy thriller film starring Tommy Wiseau and Greg Sestero. Written and produced by Sestero in two parts (Volume One and Volume Two), it marks the reunion of Wiseau and Sestero 15 years after making the cult classic The Room. The plot follows a homeless drifter in Los Angeles who begins working at a morgue, only to realize his boss is hiding a mysterious past.

In Los Angeles, a young and lonesome drifter, Jon Kortina, encounters an eccentric mortician named Harvey Lewis. Harvey takes in the homeless Jon, who is wearing a bloody T-shirt, and agrees to hire him as an assistant in his mortuary. The two become friends and hatch an underground enterprise selling the gold fillings which Harvey has collected from the teeth of corpses over the years.