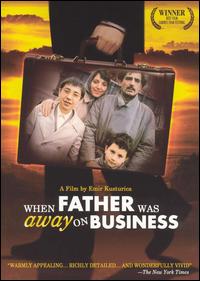 When Father Was Away on Business 1985

When Father Was Away on Business is a 1985 Yugoslav film by Serbian director Emir Kusturica. The screenplay was written by the Bosnian dramatist Abdulah Sidran. Its subtitle is A Historical Love Film and it was produced by Centar Film and Forum, production companies based in Sarajevo.

In June 1950, a local neighbourhood drunk Čika Franjo serenades field workers. He sings Mexican songs, out of self-preservation, figuring it's safer for him to steer clear of songs originating from either of the two dominant global superpowers — the United States and Soviet Union — in the current climate of Cold War. Yugoslavia is experiencing a paranoid repressive internal apparatus looking to identify and remove enemies of the state in the wake of the Tito–Stalin Split. The local children, including Malik, climb trees and play around. Malik's mother Sena tells him that his father is on a business trip, while Malik is a chronic sleepwalker. His father, communist functionary Meša, was in fact sent to a labour camp by his own brother-in-law, Sena's brother Zijo, who's an even higher positioned Communist functionary. Meša had made a remark about a political cartoon regarding the Tito–Stalin Split in the Politika newspaper.