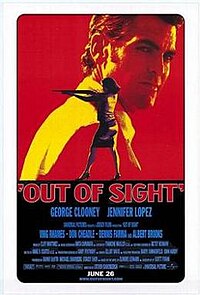 Out of Sight is a 1998 American crime comedy film directed by Steven Soderbergh and written by Scott Frank, adapted from Elmore Leonard's 1996 novel of the same name. The first of several collaborations between Soderbergh and actor George Clooney, it was released on June 26, 1998.

A career bank robber, Jack Foley, and a U.S. Marshal, Karen Sisco, are forced to share a car trunk during Foley's escape from a Florida prison. After he completes his getaway, Foley is chased by Sisco while he and his friends—right-hand man Buddy and unreliable associate Glenn—work their way north to Bloomfield Hills, a wealthy northern suburb of Detroit. There they plan to pay a visit to shady businessman Ripley, who foolishly bragged to them in prison years before about a cache of uncut diamonds hidden in his home.