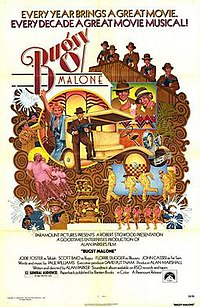 Bugsy Malone is a 1976 gangster musical comedy film written and directed by Alan Parker (in his feature film directorial debut). A co-production of United States and United Kingdom, it features an ensemble cast, featuring only child actors playing adult roles, with Jodie Foster, Scott Baio and John Cassisi in major roles. The film tells the story of the rise of "Bugsy Malone" and the battle for power between "Fat Sam" and "Dandy Dan".

During the prohibition era, a mobster named Roxy Robinson is "splurged" by members of a rival gang, using rapid-fire cream-shooting "splurge guns". Once splurged, a gangster is "all washed up... finished". Mob boss Fat Sam Staccetto introduces himself in the opening narration, as well as introducing Bugsy Malone, a penniless boxing promoter who is 'a little too popular with the broads... but a nice guy' ("Bugsy Malone").