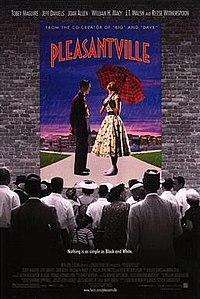 High-schoolers David and his sister Jennifer lead very different lives: Jennifer is shallow, popular and outgoing, while the introverted David spends most of his time watching Pleasantville, a black-and-white 1950’s sitcom about the idyllic Parker family. One evening while their mother is away, David and Jennifer fight over the television, breaking the remote control.