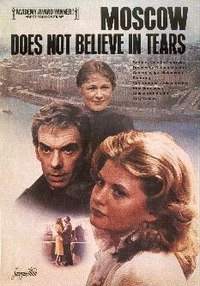 Moscow Does Not Believe In Tears 1979

Moscow Does Not Believe in Tears is a 1980 Soviet film made by Mosfilm. It was written by Valentin Chernykh and directed by Vladimir Menshov. The leading roles were played by Vera Alentova and by Aleksey Batalov. The film won the Academy Award for Best Foreign Language Film in 1981.

The film is set in Moscow in 1958 and 1979. The plot centers on three young women: Katerina, Lyudmila, and Antonina, who come to Moscow from smaller towns. They are placed together in a workers' dormitory room and eventually become friends. Antonina (Raisa Ryazanova) is seeing Nikolai, a reserved but kind young man whose parents have a dacha in the country. Katerina (Vera Alentova) is a serious, upstanding woman who strives to earn her chemistry degree while working at a factory. She is asked to house-sit an apartment for her well-to-do Moscow relatives (a famous professor's family) while they are away on a trip. Lyudmila (Irina Muravyova), a flirty go-getter looking for a well-to-do husband while working at a bakery, convinces her to throw a dinner party at the apartment, and pretend that they are the daughters of Katerina's professor uncle, as a ploy to meet successful Muscovite men. At the party, Lyudmila meets Sergei, a famous hockey player, who falls in love with her and marries her even after discovering the truth about her origin. Katerina meets Rodion (Yuri Vasilyev), a smooth talker who works as a cameraman for a television channel. They start dating. During Antonina and Nikolai's wedding, Lyudmila and Antonina find out that Katerina is pregnant. Upon discovering that Katerina deceived him and is not the daughter of a professor, Rodion refuses to marry her and believes that she is to have an abortion. Katerina is unable to get an abortion because her pregnancy is in a late stage and ends up giving birth.