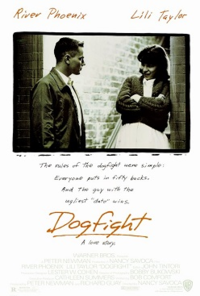 Dogfight is a 1991 period coming-of-age drama film set in San Francisco, California, during the 1960s and directed by Nancy Savoca. The film explores the love between an 18-year-old Marine, Lance Corporal Eddie Birdlace (River Phoenix) on his way to Vietnam, and a young woman, Rose Fenny (Lili Taylor).

The first portion of the film is set on November21, 1963 (the day before President John F. Kennedy was assassinated). Birdlace and three of his Marine buddies have arrived in San Francisco for twenty-four hours, before shipping off to Okinawa, and are planning on attending a "dogfight" (a party where Marines compete to bring the ugliest date, unbeknownst to the girls they bring) later that evening. They separate into the city to attempt to find dates. After a few women reject his advances, Birdlace ducks into a coffee shop, where he encounters Rose, a waitress, on her break, practicing her guitar. She is not particularly "ugly", but rather plain, shy and awkward. Birdlace attempts to charm her, complimenting her on her guitar playing, and inviting her to a party. She is suspicious of his motives, but decides to accept his invitation.