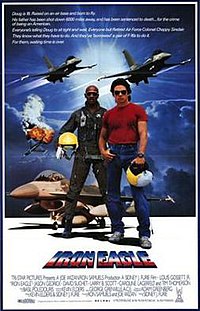 Iron Eagle is a 1986 military action film directed by Sidney J. Furie, co-written by Kevin Alyn Elders and starring Jason Gedrick and Louis Gossett Jr. While it received mixed reviews, being unfavorably compared to the similarly-themed Top Gun released the same year, the film earned $24,159,872 at the U.S. box office. Iron Eagle was followed by three sequels: Iron Eagle II, Aces: Iron Eagle III, and Iron Eagle on the Attack, with Gossett being the only actor to have appeared in all four films.

Doug Masters, son of veteran U.S. Air Force pilot Col. Ted Masters, is a hotshot civilian pilot, hoping to follow in his father's footsteps. His hopes are dashed when he receives a notice of rejection from the Air Force Academy. Making matters worse is the news that his father has been shot down and captured by the fictional Arab state of Bilya while patrolling over the Mediterranean Sea.