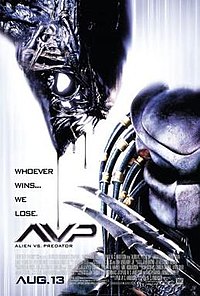 Alien vs. Predator (also known as AVP: Alien vs. Predator) is a 2004 science fiction action film written and directed by Paul W. S. Anderson, and starring Sanaa Lathan, Raoul Bova, Lance Henriksen and Ewen Bremner. It is the first film installment of the Alien vs. Predator franchise, adapting a crossover bringing together the eponymous creatures of the Alien and Predator series, a concept which originated in a 1989 comic book. Anderson wrote the story together with the creators of the Alien franchise, Dan O'Bannon and Ronald Shusett, and Anderson and Shane Salerno adapted the story into a screenplay. Their writing was influenced by Aztec mythology, the comic book series, and the writings of Erich von Däniken. In the film, scientists are caught in the crossfire of an ancient battle between Aliens and Predators as they attempt to escape a bygone pyramid.

In 2004, a satellite detects a mysterious heat bloom beneath Bouvetøya, an island about off the coast of Antarctica. Wealthy industrialist Charles Bishop Weyland (Lance Henriksen) discovers through thermal imaging that there is a pyramid buried beneath the ice. He attempts to claim it for his multinational communications company, Weyland Industries, a subsidiary of the Weyland Corporation, and assembles a team of experts to investigate. The team includes archaeologists, linguistic experts, drillers, mercenaries, and a guide named Alexa "Lex" Woods (Sanaa Lathan).