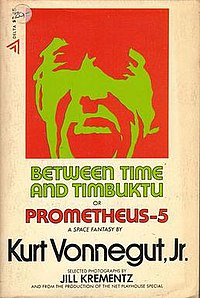 Between Time and Timbuktu 1972

Between Time and Timbuktu is a television film directed by Fred Barzyk and based on a number of works by Kurt Vonnegut. Produced by National Educational Television and WGBH-TV in Boston, Massachusetts, it was telecast March 13, 1972 as a NET Playhouse special. The television script was also published in 1972, illustrated with photographs by Jill Krementz and stills from the television production.