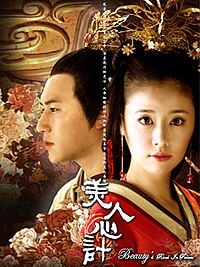 Beauty's Rival in Palace (Chinese: 美人心計, pinyin: Měirén Xīnjì, lit. Schemes of a Beauty) is a 2010 Chinese television series adapted from Xiao Qiying's short story Turbulence in the Empress' Chamber. It was first broadcast on Shanghai TV Drama on 15 March 2010. The series was one of the highest-rated Chinese TV series in 2010.