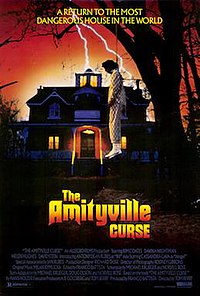 The Amityville Curse is a 1990 American-Canadian supernatural horror film directed by Tom Berry and starring Kim Coates, Cassandra Gava and Jan Rubeš. It is loosely based on the novel of the same name by Hans Holzer. It is the fifth film in the Amityville Horror film series.

In Amityville, New York, the same town in which Ronald DeFeo Jr. murdered his family in 1974, a Catholic priest is shot to death in a confession booth in his parish church. After the murder, the booth is removed and stored in the basement of the clergy house.