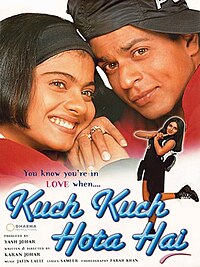 Kuch Kuch Hota Hai also known as KKHH, is a 1998 Indian Hindi-language romantic drama, written and directed by Karan Johar. It stars the popular on-screen pair of Shah Rukh Khan and Kajol in their fourth film together, along with Rani Mukerji. The film also marks the film debut of Sana Saeed. The plot combines two love triangles set years apart. The first half covers friends on a college campus, while the second tells the story of a widower's young daughter who tries to reunite her dad with his old friend.

Rahul Khanna loses his wife, Tina after she gives birth to their daughter, Anjali Khanna. He raises Anjali as a single father, with the help of his mother. Anjali grows up treasuring the letters her mother wrote before she died for her to receive on her first eight birthdays. On her 8th birthday, Anjali reads the last and most important letter that her mother left her; it tells the story of Rahul, Tina, and Anjali Sharma.