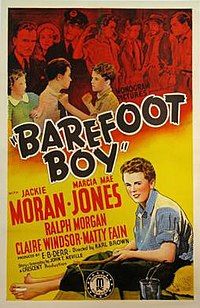 Barefoot Boy is a 1938 American children's adventure film, directed by Karl Brown, and "suggested" by the poem of the same name by American writer John Greenleaf Whittier. Text from the original poem is recited after the titles.

Kenneth Hale, a pampered, snobbish young boy is sent by his father, John Hale, who has served time in prison for a crime he did not commit, down to the country farm of an old friend, Calvin Whittaker. The barefooted, honest and plucky Billy Whittaker, his girlfriend Julia Blaine, her older sister Pige, and punky Kenneth get involved with a "haunted" house and a gang of crooks, while Billy helps make a "better man" out of Kenneth.