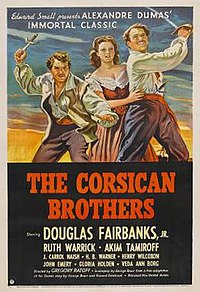 The Corsican Brothers is a 1941 swashbuckler film starring Douglas Fairbanks Jr. in a dual role as the title Siamese twins, separated at birth and raised in entirely different circumstances. Both thirst for revenge against the man who killed their parents (played by Akim Tamiroff), both fall in love with the same woman (portrayed by Ruth Warrick). The story is very loosely based on the 1844 novella Les frères Corses (in English: The Corsican Brothers) by French writer Alexandre Dumas, père.

In Corsica, the entire Franchi clan gather in anticipation of the birth of the child of Count and Countess Franchi (Henry Wilcoxon, Gloria Holden). Dr. Enrico Paoli (H. B. Warner) informs the count that his wife has given birth to Siamese twins. Count Franchi insists he try to separate them surgically, even after Paoli tells him that it would be a miracle if the babies survived. Before he can begin, however, the Franchis' bitter rivals the Colonnas launch a surprise attack, led by Baron Colonna (Akim Tamiroff). All of the Franchis are killed except the babies, who are carried to safety by Paoli and faithful family retainer Lorenzo (J. Carrol Naish).