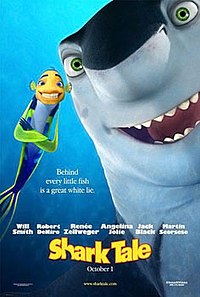 Shark Tale is a 2004 American computer-animated comedy film produced by DreamWorks Animation and distributed by DreamWorks Pictures. The film was directed by Vicky Jenson, Bibo Bergeron, and Rob Letterman (in his feature directorial debut), from a screenplay written by Letterman and Michael J. Wilson. The film features an ensemble cast that includes the voices of Will Smith, Robert De Niro, Renée Zellweger, Jack Black, Angelina Jolie, Martin Scorsese, Ziggy Marley, Doug E. Doug, Michael Imperioli, Vincent Pastore, Peter Falk, Kevin Pollak, and Katie Couric. It tells the story of an underachieving fish who falsely claims to have killed the son of a shark mob boss, to advance his community standing and teams up with the mobster's other son Lenny to keep up the façade. Before long, he begins to regret his newfound fame.

In the Southside Reef, a lowly Hawaiian cleaner wrasse named Oscar fantasizes about being rich and famous. He owes money to his boss, a pufferfish named Sykes. His best friend, an angelfish named Angie, offers him a pearl that was a gift from her grandmother to pawn and pay his debt. Meanwhile, Don Edward Lino, the boss of a mob gang of sharks, orcas, swordfish and octopuses, dislikes that his son Lenny is a vegetarian. Lino orders his violent eldest son, Frankie, to mentor Lenny.