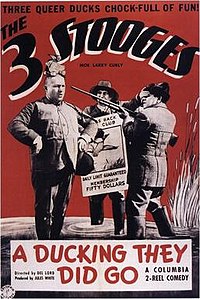 A Ducking They Did Go is a 1939 short subject directed by Del Lord starring American slapstick comedy team The Three Stooges (Moe Howard, Larry Fine and Curly Howard). It is the 38th entry in the series released by Columbia Pictures starring the comedians, who released 190 shorts for the studio between 1934 and 1959.

While looking for work, the Stooges botch an attempt to steal a watermelon from a deliveryman (Cy Schindell), which lands them in trouble with a cop (William Irving). The trio wind up at the offices of the Canvas Back Duck Club, a hunting organization run by conmen Blackie (Lynton Brent) and Doyle (Wheaton Chambers) needs some salesmen and the trio has no trouble getting the job because, unbeknownst to them, the whole thing is a scam. Dressed in duck-hunting gear, Moe, Larry and Curly invade the police station and barge right into the office of the police chief (Bud Jamison).