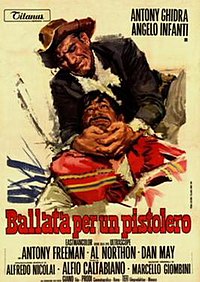 Ballad of a Gunman, also known as Pistoleros and Ringo, Pray to Your God and Die is a 1967 Italian spaghetti western directed by Alfio Caltabiano and starring Antony Ghidra.

The criminal brothers El Bedoja and Chiuchi have each their own gang. Together they rob a stagecoach. After they've just got rid of all witnesses by killing the passengers, they are already about to plan the next coup together. This time they want to do the bank of Mallintown. Its safe is considered unbreakable but it does open automatically shortly at certain times. The two gang leaders use the stagecoach as a kind of Trojan Horse to get gang members unrecognised into the town and moreover to have a big chest put into the strongroom. When the time has come for the safe to open, Chiuchi attacks the town as a diversionary tactic and lures the guards away. Then El Bedoja carries out the actual strike with his own gang, taking the now scarcely protected bank by surprise. Here he unites with the other gang members who have arrived with the stagecoach already.